A Plague Tale: Innocence is the upcoming game created by the small Asobo Studio and is being published by video game publisher Focus Home Interactive. The game is set to release May 14th 2019 on Windows, Xbox, and PS4. A Plague Tale was first announced in E3’s 2017 showcase and then again appeared in 2018 to show where abouts the game was. Now two years after its reveal, the game is quickly approaching release date with us patiently eager nerds gamers waiting to dive into the world Asobo Studios has created.

Plague Tale: Innocence takes place in 14th century France; right in the middle of the Black Death – the notorious plague known for killing 30% of Europe’s population. So if you thought it was going to be a happy and 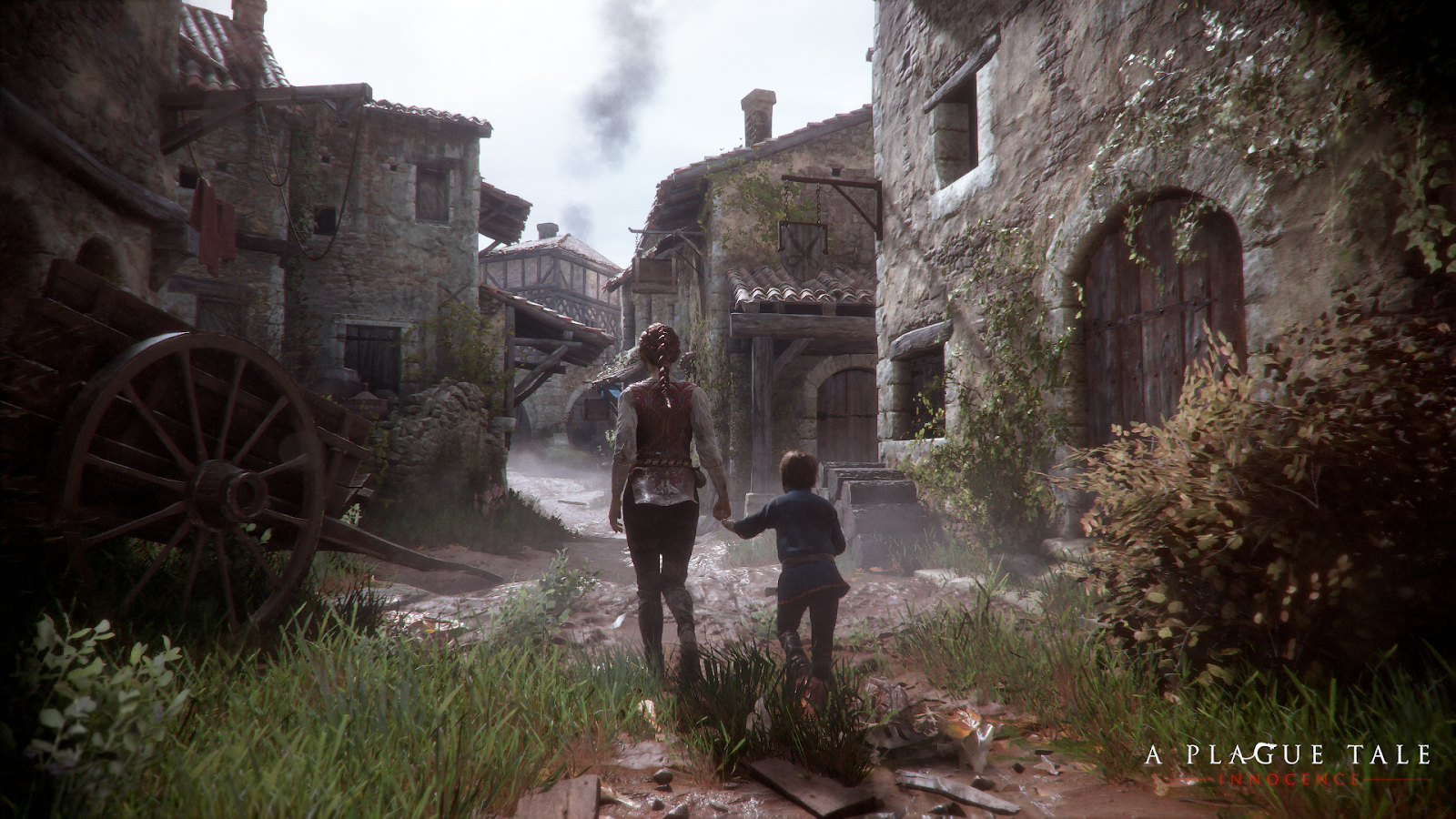 shiny France, then you’re set for nothing but disappointment. Asobo Studio created a beautiful yet somewhat haunting world. The story explores the Plague Tale world through Amicia De Rune’s eyes, a young woman from a noble family tasked with protecting her younger five-year old brother Hugo, who has some mysterious illness. You would think it’s just the plague that the De Rune siblings need to worry about, but nope, enter the Inquisition: an army that proves to be a constant threat to Amicia and her brother.

In A Plague Tale, Amicia and Hugo must face two major oppositions:
Firstly the plague itself; embodied by huge swarms of rats. Asobo 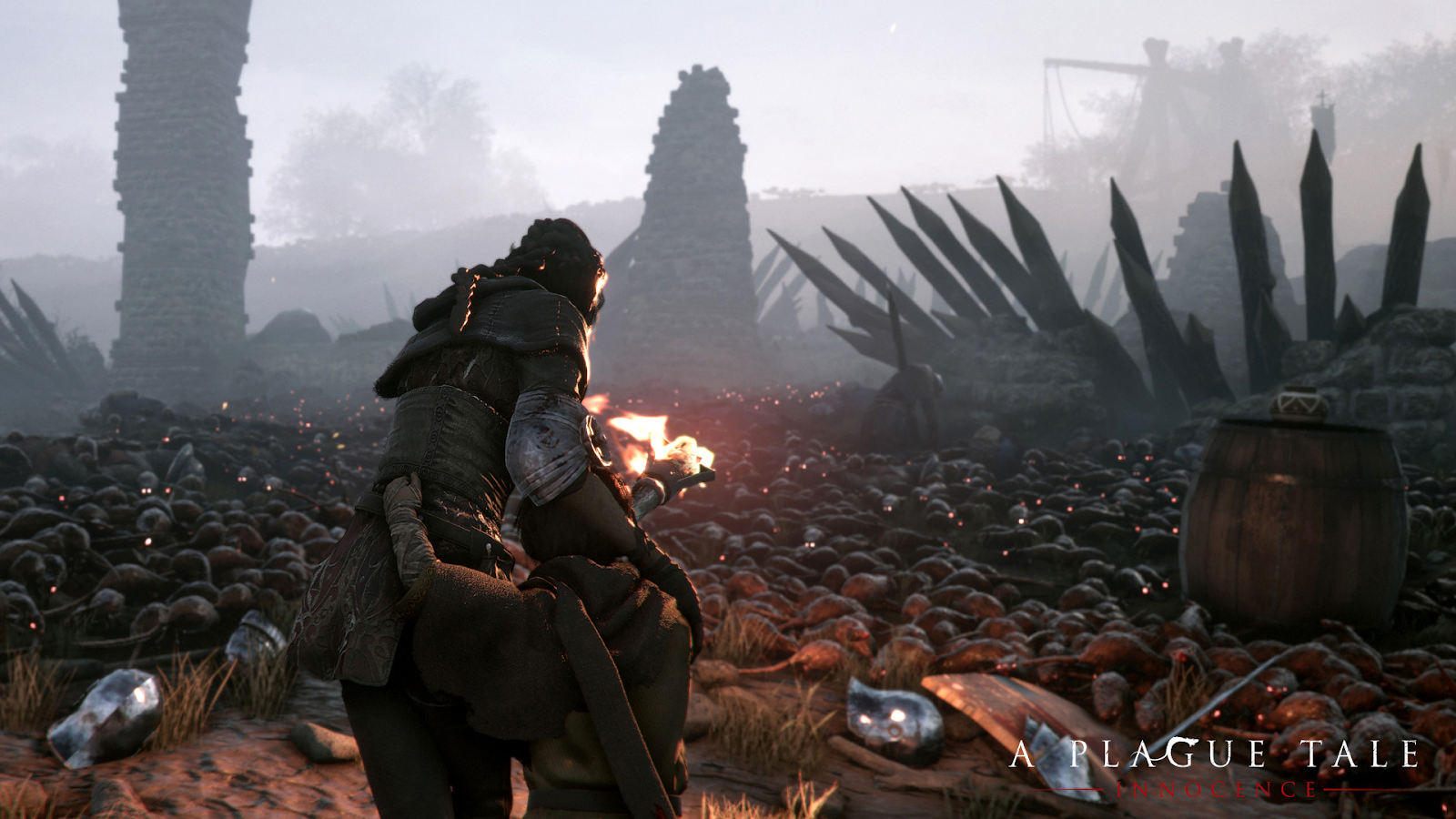 Studios has said that their game is capable of rendering in at least 5,000 rats at any given time, each with their own mind. These rats can provide some seriously graphic scenes, thousands of bloodthirsty little shi- *Ahem*… rodents with glowing red eyes chasing down anyone who is unfortunate enough to find themselves where the light does not touch.
The second threat to Amicia and Hugo are other people, from cautious city civilians who are reluctant to accept strangers into their society, to an entire Inquisition constantly at the De Rune sibling’s heels. Since the duo are young and therefore fragile, they can’t go around decapitating everyone’s heads like most traditional games have you do. Don’t get me wrong, you do hit some sweet headshots with Amicia’s sling, but it’s not at all the main focus. The game forces you to adopt a more passive playstyle; sticking to stealth or less direct methods of putting down enemies. Well… I say “putting down enemies” but it’s much more graphic than that. Asobo Studios spent a lot of time on immersion, and since the Black Death was an awful time, you will see some pretty revolting sights in the game.

So what’s actually going on?
Warning: Although this section does not necessarily spoil anything, it does talk about the information already provided by the Studio AND explores some possible theories.

As briefly touched on earlier, we know Hugo has some kind of illness, however I don’t think it’s the plague. I thought to myself: “Why would the entire of the Inquisition be hunting Hugo down if he’s just got the plague?” Well I have two theories:

Theory One: Hugo messed up and seriously pissed off the Inquisition 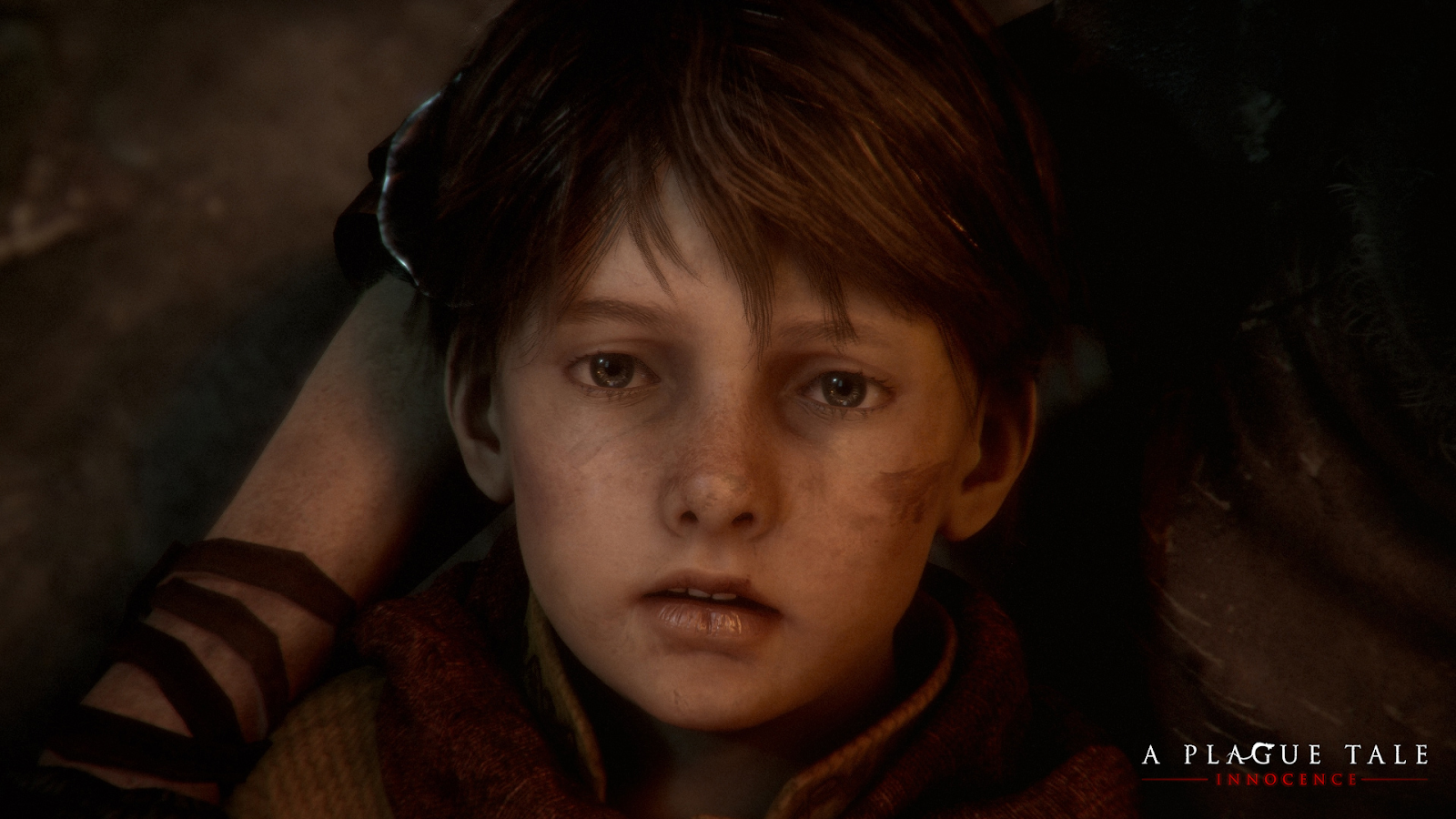 . This probably isn’t the case because… well how can a five-year old mess up so badly that he is now on the hit list of the entire inquisition? Plus if you’ve watched the trailer, you would know that Hugo is an absolute sweetheart. Then again, some kids can be REAALY annoying.

Theory Two: His mysterious illness. Hugo was kept isolated from the world since birth and was cared for by his mother, Béatrice, who used her skills in alchemy to keep him healthy. Since Béatrice was mostly focused on Hugo she often neglected her daughter, much to Amicia’s distaste. As a result, Amicia grew a kind of jealousy for Hugo, even though the two have never properly met. This illness Hugo has is probably what the Inquisition are after. May it be to eradicate him so it can’t spread further, or to perform some weird experiments on him. Maybe they want to extract the illness, amplify it and then weaponise it?

The De Runes are a family of nobles, so for 14th century France, Amicia lives quite well off. But little does she know that the world isn’t all sunshine and rainbows. The world will beat her down to her knees and keep her there permanently if she let it. She, the plague or nobody will h-

*Ahem* got a little bit side-tracked with Rocky there.

Amicia’s problems with her little brother escalated rapidly when the plague hit France, resulting in her having to take care of him. This implies something happened to Béatrice, she probably caught the plague and suffered a very horrible, slow, tragic death… (Oof, F in chat). The De Rune siblings now have to struggle to survive whilst avoiding both the Plague and the Inquisition.

So… what about the father? Where is he in all of this? In the story 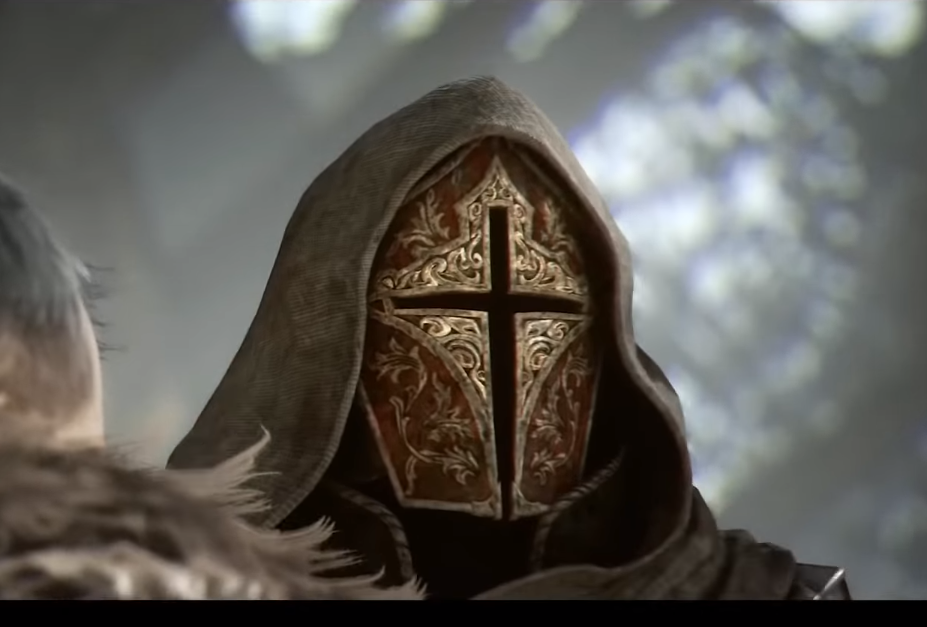 trailer, the father of the De Rune siblings can be seen on his knees, with a rather “unfriendly” looking chap, asking for Hugo. So who is this rather threatening masked man? He goes by the name of Vitalis, an angry as hell guy who is determined to do whatever he wants to get his hands on little Hugo. He’s not exactly the sort of guy you want to go to the local tavern with to have a couple of drinks. Vitalis is a very determined character, fueled by his faith, allowing nothing to stand in his way by using his brutal methods to get what he wants; what he believes is for the greater good.

Bringing it all together
Throughout the game, the idea of “innocence” is emphasised (who would of thought; it’s not like its in the title or anything). Asobo Studio aims to do this mainly through Amicia, Hugo and the other children you meet throughout the story. Let’s take a look at Hugo, he has no clue what’s happening. How could he? He’s five-years old, living through one of the biggest natural disasters in all of human history. It doesn’t 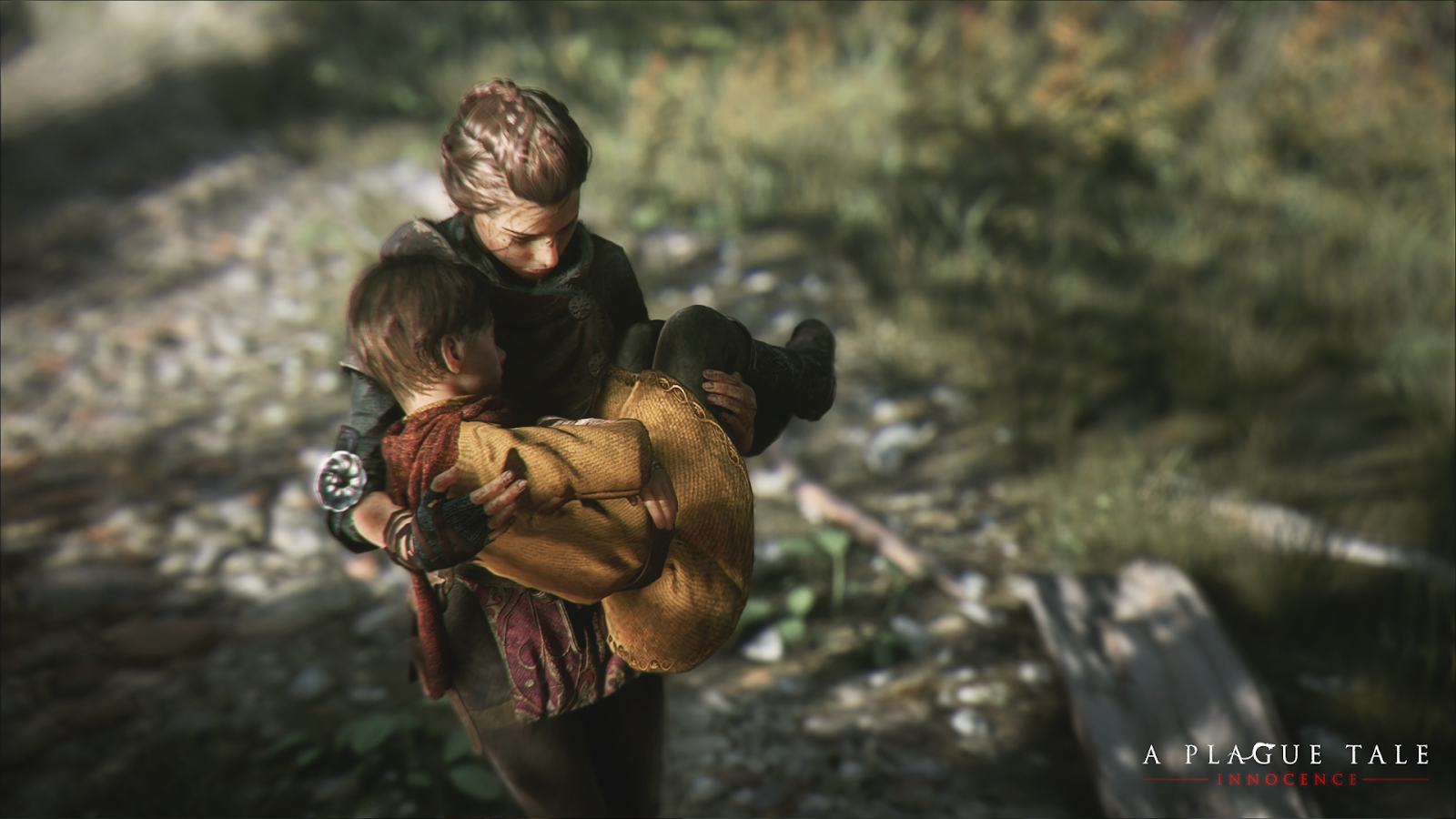 help that he was isolated for his entire life so that, when he finally does go  into the open world, he’s greeted by the Plague. You can see from the trailer Hugo is a vulnerable character and he knows this, he tells Amicia whilst she comforts him “I’m sorry I’m sick” and if that didn’t break your heart then I salute your emotional strength, because it sure broke mine. That’s what I’m looking forward to most in the world of A Plague Tale; the story, emotion and growth each character goes through, especially how Amicia and Hugo bond throughout the game.
Why?
You can get a great game that you have fun with, but the most eye opening games, you know the ones that draw you in? They have the most compelling storylines – a series of twists and turns taking you on a route you might not expect.
I’ve seen a lot of people compare this game to The Last of Us, and I can see why (slightly). Don’t get me wrong, there’s a huge difference and by no means am I saying A Plague Tale is comparable to The Last of Us (yet). But take two of the most iconic games this decade: The Last of Us and God of War. In The Last of Us, Joel has his bond with Ellie and in God of War Kratos has his bond with Atreus. These two games absolutely blew apart the industry, earning all kinds of accolades. In A Plague Tale, Amicia has Hugo. Asobo Studio has developed a beautiful game with an intense foundation – which isn’t easy to do as a small team. All we now have to do is wait to play the game and dive into the universe that Asobo has created for us.

Signing off Note
So there’s my first article on a specific game itself! I’ve been really excited about A Plague Tale: Innocence recently and most definitely will get this on release (probably will pre-order it soon!) Expect a review after release!
So what do you think? Do you think Amicia and Hugo will survive the Plague and the Inquisition? Do you reckon the game will be the next The Last of Us/God of War? Let me know in the comments below, I’ll read and respond to them all!

And as always:
Stay woke, Gamers

All pictures used were taken from the official A Plague Tale: Innocence website.